Other than being the big export center for the Chinese fast-growing economic, Guangzhou is also an important travel destination with plenty of interesting attractions. The huge metropolis is a combination of old and new Chinese values, which makes up diverse travel experiences for everyone. There’s one of the largest tourist resort complex in the country that is great for family trips. There are also plenty of historical sites for those who are interested in a cultured trip. Come along and read our list of the best Guangzhou attractions in order to make the most out of your time here.

It may take more than just one day to discover Chimelong Tourist Resort – a massive amusement complex that features almost anything! There’s a theme park, a circus venue, a zoological park, a waterpark, and 3 hotels. It is not easy to find this much entertainment in another place. Despite its grand size, Chimelong Paradise still can get quite busy during holidays and weekends. In order to enjoy the best journey here, travel on a weekday. 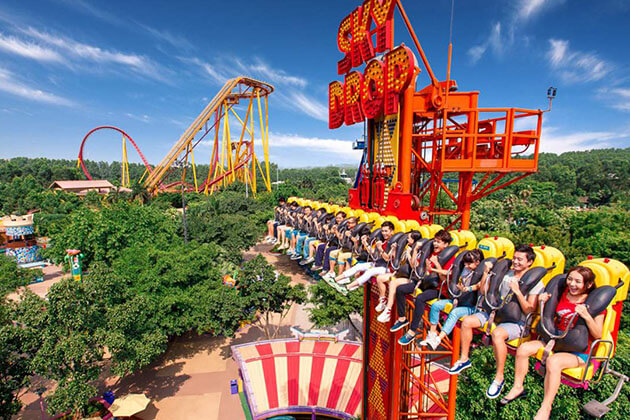 Considered as one of the most iconic landmarks of Guangzhou, Canton tower is a must-visit attraction for both native and foreign tourists. In the daytime, you can get to the top of the tower to enjoy the view of the city from the above. And at night, travel to the Zhujiang New Town area to watch the Canton Tower lit up against the dark background with colorful lights. The building also has plenty of restaurants and coffee shops inside for travelers to stop by and enjoy a nice meal.

In the late 19th century, the Chen family living in Guangzhou was a famous and influential clan. They built the Chen clan ancestral hall as a place to honor their ancestors and a hall for young boys in the family to come to study for the imperial examination. Nowadays, the ancient architectural style of the complex is still well-preserved in 19 buildings, 9 halls, and 6 courtyards. It also houses the Guangdong Folk Arts Museum, where tourists can enjoy Chinese traditional works of art.

Temple of the Six Banyan Trees

The Temple of the Six Banyan Trees is a 1500-year-old shrine in southern Guangzhou. It was built by the order of an ancient emperor to house a sacred relic from Cambodia. Although the temple suffered quite significant damages from fires in the past, at present, it is still one of the most famous historical attractions in the city. Visitors coming here will have the chance to see the colorful nine-story Flower Pagoda that has petal-like curved roofs.

The Sacred Heart Cathedral is another religious attraction in Guangzhou that visitors should not miss. The Catholic cathedral took 25 years of construction and was finished in the late 19th century. You don’t have to be a Catholic to visit this biggest cathedral in Guangzhou with delicate carvings and colorful glass windows. The Sacred Heart Cathedral is also famous for being built completely from granite, which is a highlight in its architectural value. 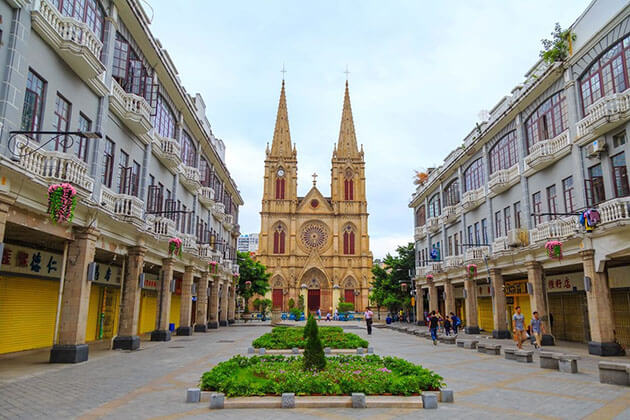 Guangzhou Attractions for A Cultural Experience

Huacheng Square represents the modernity in the city life of Guangzhou. Here you will find new buildings and landmarks such as the International Finance Center, the city library and Guangdong Museum.
Visiting Guangdong Museum will give you a real insight into Cantonese nature, art, culture, and history. The 67,000 square meters museum looks like a jewelry box from the outside, with over 166,000 artifacts and artworks inside. 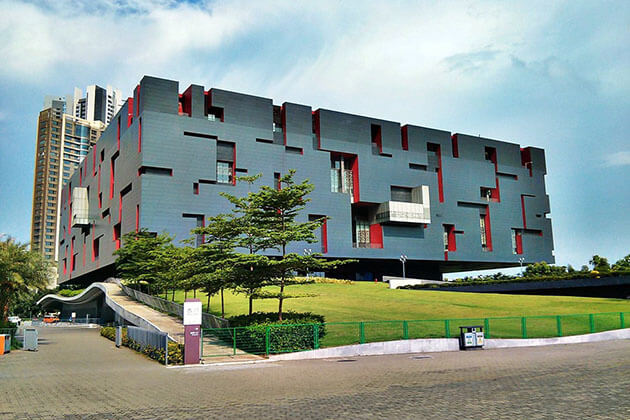 Come and visit Shamian island as it will offer a unique European vibe to your Chinese vacation. Despite the peaceful appearance, Shamian island had a history full of ups and downs. In the 19th century, foreign traders came and chose this island as their settlement in the Pearl River. And then in the second Opium Wars in the 1850s, it served as a defense point and a concession territory for the United Kingdom and France in 1960.
Nowadays, the European buildings and streets are still maintained with their original forms on Shamian island.

Museum of the Mausoleum of Nanyue King

And last but not least, the Museum of the Mausoleum of the Nanyue King is one of the best attractions in Guangzhou. The tomb is open for public visits and presents most of the ancient artifacts found inside. Although the tomb is nearly 2000-year-old, the museum part is rather new and well-constructed. If you can’t make it to Emperor Qinshihuang’s Mausoleum Site Museum in Xi’an, Nanyue King’s tomb is just as good.